Imagination takes you to another world

The source of inspiration for most of the paintings sprung out of visits to the numerous small Roman churches dotted around the French countryside (Haute Saintonge). Constructed in the Middle Ages (11th, 12th century) these structures continue to endure time, though time has left a clear mark on them. It is these markings, left by the “veil of time”, that ignited the embers of inspiration. Using a large number of mixed media, including unorthodox materials such as sand, textile, plaster and clay, a kind of “skin” is formed which portrays the wear and tear left by the passage of time.
Additionally, a fascination for signs and symbols of various origins, forms an important basis for the working process, mostly applying them in an intuitive manner.

Of note also, is the often repeated central composition, used to create a sense of entering a strange new world, within which we must redefine ourselves.
Outside the known physical and material world we may discover another world, which appears much larger and more expansive.
We may discover evidence of this world by studying the fields of philosophy, psychology, astrology, alchemy, anthroposophy, music, mathematics and, last but not least, art.
Leo’s paintings allow us a glimpse into this other world, as if witnessing a process in action. A process which may be “completed” by discovering a meaning for oneself, or it may remain a mystery, forever open to interpretation.
Some pieces, for example the 5-part series entitled “Continents”, may reveal a certain meaning after some time, while others may elude interpretation, remaining a mysterious puzzle of signs and symbols.
Another large contributing factor to Leo’s inspiration are the works of Antoni Tàpies (Barcelona 1923-2012), which aid in directing the process of creation.

A traditional sheet of cotton is stretched over a wooden frame, on top of which paper is glued to create the base for Leo’s work. The painting is then formed by adding layer upon layer of a home-made paste, consisting of paint, sand and resin, among others. However, for the day to day works, various grades of paper are used and, increasingly, recycled cardboard packaging is incorporated as well.
While working, inspiration is also drawn from certain types of music, such as Dead Can Dance, Sainte Colombe and Bach Cantates.
The atmosphere invoked by such music is palpable in the symbolic language of the paintings. 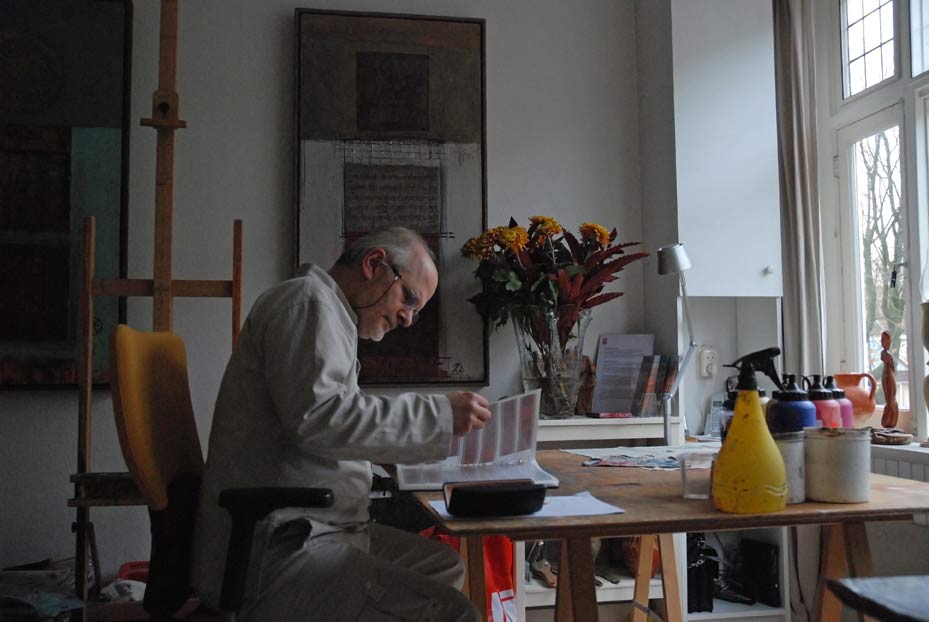 For Leo Schepens, intuition, emotion and observation of the environment play an important part in creating art. See below for some images that serve as a source of inspiration for his paintings and drawings.